Caesars the First Casino to Sponsor the NFL 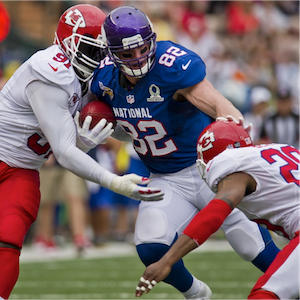 The Caesars Entertainment Corporation has agreed to a sponsorship deal worth US$30 million with the National Football League. They’ve been named the first-ever official casino sponsor for the NFL! The partnership between the organisation, which operates 3 Atlantic City hotels with gambling facilities, and the alliance will start when the playoffs do, on Saturday the 5th of January.

The Details of the Deal

Caesars will enjoy exclusive rights to the use of League’s trademarks in both the USA and the UK to promote their gambling properties and at major events, including the Draft and the Super Bowl. The multiyear deal, however, does not include fantasy football or betting.

The Associated Press has reported that the agreement is worth US$30 million each year for 3 years, although this information comes from an anonymous source, as specific terms have not yet been announced.

Mark Frissora, President and Chief Executive Officer of Caesars Entertainment, spoke of everyone at the organisation being delighted to be the very first casino partner to the NFL, thanks to its standing as North America’s most important sports alliance. He added that when the league’s 180 million supporters were combined with the 55 million members of the Total Rewards Loyalty Programme his company headed, millions of people would be exposed to the exclusive, exciting, year-round opportunities their properties presented.

All Thanks to the Overturned Ban on Betting

A number of sponsorship deals between sports leagues and casino operators got announced last year, thanks to the national prohibition on betting getting overturned by the US Supreme Court in May 2018. This was in spite of the efforts of 5 of the major sports leagues, the MLB, the NBA, the NCAA, the NFL, and the NHL, who all challenged the state of New Jersey’s efforts to legalise wagers at Atlantic City’s casinos and the area’s racetracks.

The case eventually ended up in the Supreme Court, and this was where the federal Professional and Amateur Sports Protection Act of 1992 was overturned. The Act allowed only single-game stakes in the state of Nevada.

Since then, MGM Resorts International, which operates the Borgata Casino & Spa in Atlantic City, has signed deals with the MLB, the NBA, and the NHL. Caesars currently has relationships with 7 teams from the NFL, including the Atlanta Falcons, the Baltimore Ravens, the Chicago Bears, the Indianapolis Colts, the New Orleans Saints, the Oakland Raiders, and the Philadelphia Eagles.