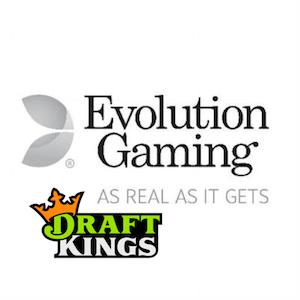 Daily fantasy sports specialists DraftKings will soon be offering live casino games to its large following of fans and players. The Boston-headquartered operator has confirmed that it has entered into an agreement with live casino games specialists Evolution Gaming, according to which the latter will provide its expertise and services from its recently opened Atlantic City studio.

As it stands, Evolution provides a similar service to a number of other operators, including Hard Rock Hotel & Casino Atlantic City, Rush Street Interactive, 888Casino, PlaySugarHouse.com, and Ocean Resort Casino Atlantic City.  DraftKings will be joining a highly reputable list of operators. Not that the fantasy sports operator isn’t in itself a major success story! Now a leading sports betting operator in New Jersey, the company in December performed a short second only to its closest rival, namely FanDuel.

James Stern, Chief Business Officer for Evolution Gaming’s American regions, confirmed that the company was excited about the prospects of aiding DraftKings and empowering the operator to catapult its existing product offering to new levels of achievement by incorporating live casino games.

The team at DraftKings are no strangers to taking the bull by its horns and achieving what it has set out to do. This was quite apparent recently when it became one of the very first sports betting operators in the newly regulated US state of New Jersey. This was thanks to the fact that the operator had put in the effort to do the groundwork in terms of advertising and the like just as soon as its licence application had been lodged with the state’s regulatory authorities.

DraftKings’ aggressive and intensive approach to advertising did not go unnoticed, and even Stern commented on the fact that the operator did not make a habit of allowing the grass to grow underneath its feet. Stern said that this had impressed the Evolution team.

The operator offers its daily fantasy sports games across 11 pro-sports, and is licensed to do so in 8 countries, including the United States, Australia, Canada and the United Kingdom.