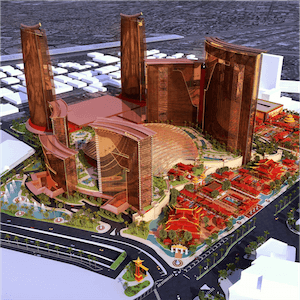 After numerous costly delays, Genting’s Las Vegas mega-resort is scheduled to open in 2020. Originally set to open its doors in 2016, several redesigns led to rebuilds and extra costs, which delayed completion. However, the company has now secured the final $1 billion need to complete the project by selling a ten-year bond.

The Genting Group is owned by Lim Kok Thay and operates resorts in Malaysia, Singapore and the Philippines. The company holds approximately $40 billion of the market, across five listed companies.

The first project of this size in more than ten years, the new Genting Las Vegas Mega Resort is being constructed on the land once occupied by the Stardust Casino.

Resorts World Las Vegas will open its doors to 3 hotels, which will accommodate 3,500 guests. The gaming floor will feature over 3100 slots and table games spread across 30,000 square meters. The design also includes elaborate gardens and an authentic Asian theme. The resort aims to attract a large portion of its visitors from China’s pool of VIP high rollers, and tourists from the United States.

Among the main factors that have led to delays was a lawsuit filed against Genting by Wynn Resorts. Wynn Resorts occupies the land across The Strip from Resorts World Las Vegas, and claimed that the Resort World architectural décor was too similar to its own. The company claimed copyright infringement, and an out of court settlement saw Resort World removing the bronze and glass cladding Wynn Resorts complained about.

Genting’s Senior VP stated that the company chose to settle in order to affect the cost and timelines of its project as little as possible.

Genting has had a spate of bad luck with its new developments. In 2018 the company was awarded the bid to build a casino in Massachusetts with the Mashpee Wampanoag tribe. The project was put on hold after the United States Department of Interior ruled that a previous ruling giving land to the tribal trust was incorrect.

The land was subsequently withdrawn, which resulted in a $440 impairment reported in the company’s Q3 report. This amount represents the company’s financial backing for the $1 billion tribal casino.

Now, Genting is hoping there won’t be any further delays with the Las Vegas project, and the new hotel and casino will open on its already-adjusted schedule.