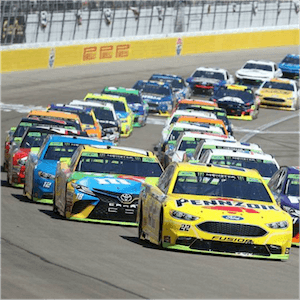 The US may be embroiled in yet another battle as far as the online gambling industry is concerned, with many now questioning the meaning of the wording of the original Wire Act (because we just love to nit-grit!), but fans of NASCAR (National Association for Stock Car Auto Racing) have much to celebrate because soon, they will be in a position to bet full-throttle on their favourite sport.

Last year, fans were treated to a taste of possible things to come when a trial betting-station was erected at the Dover International Raceway. Fans were able to place bets on a surprising number of outcomes, including on the winner of the race, the winner of individual stages, number of lead changes and more.

More betting stations were erected after that, and the idea was that the association would be able to make certain assumptions as to what would work and what would not work if an official betting system were to be implemented. The idea was that this would eventually facilitate things such as a sports betting rulebook specifically for NASCAR events, as well as guidelines as to how sponsorships and advertising would work.

Show And Tell May Offend Some

As it stands at the moment, the issue of sponsorships is on the table. The association is now looking for a single major sponsor-partner that will be associated exclusively with NASCAR. This is the example that has been set by other major groups like the NBA, the NFL and the MLB.

The association hopes that all teething problems will have been sorted out by the time February 17 rolls around, as this marks the beginning of the new NASCAR season for the year; the Daytona 500.

There are however various broadcasting issues that must be resolved. NASCAR events are broadcast by NBC and Fox Sports. Despite the fact that these television networks are more than happy to provide cover that includes gambling sponsors, sports betting has not yet been legalised in each and every US state. Television networks may be willing to broadcast footage that contains images of gambling-related sponsorships, but they are still in no mood for the legal battles that may or may not follow as a result thereof.

In With The New

When all is said and done, NASCAR will be going ahead with its sports betting endeavours, as the association believes that this will encourage viewership and interest on the parts of fans in general, which is something that has been on the decline due to what the authorities believe is as a result of the events having become mundane and predictable.